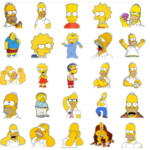 Simpsons has members, it's main lanaguage is English (US).

We a presenting you Telegram chat stickers for Simpsons that will give you great Nostalgic vibes.

Simpson is a famous cartoon animated series that is being aired for a long time. Simpson is so famous and controversial at the same place. Simpson has a lot of reasons for its popularity. It revolves between a family life that discusses the things very nicely with comedy and seriousness. IMDB rating of Simpsons is a testimony of its popularity. It was started back in 1987 and has 8.7 IMDB rating and it has 30 seasons. It is mainly based on expressing the lives of working middle class and their typical way of addressing the affairs. Simpsons is most famous for its future predications and President Trump’s presidency is one the predictions of Simpsons cartoons. So such facts makes it an interesting series to watch.