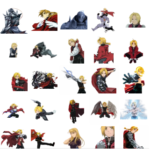 Fullmetal Alchemist has members, it's main lanaguage is English (US).

Add Fullmetal Alchemist chat stickers to your telegram and that too for free.

Japan is known for a lot of Manga and Anime series. Fullmetal Alchemist is a fictional story of 2 brothers that are inspired by European industrial revolution and want to do wonders in the world by using the knowledge of alchemy. Both of the brothers Edward and Alphonse are trying hard to find philosopher’s stone after an entire failed attempt to bring their mother back to life while using the advanced techniques of scientific laws of equal exchange. This anime series is considerably older as it was aired in 2003. As a result of failed alchemical process both brothers have damaged a sizable portion of their bodies and now they want to heal it up by having philosopher’s stone.