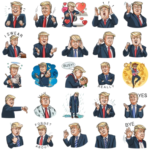 Donald Trump Telegram Stickers has Less then 100 members, it's main lanaguage is English (US).

This Telegram sticker pack is featuring Donald J Trump, the 45th president of the United States.

Donald J Trump is one of the most influential people on our planet. Ever since he won the 2016 election for the presidency of the United States, he became an enormous part of our lives. He has the right to make decisions that have a real influence on people from all over the world. It does not matter if you like the guy since he already won. His straightforwardness has changed the way people and media react and interpret government activity.


Donald Trump is an icon

Way before Donald Trump decided to run for the presidency on behalf of the republican party, he already was a celebrity. Most of us got to know him as the big boss from “The Apprentice”, a reality tv-show that was running from 2004 to 2015 (yes, one year before he became president). Trump has always been in our lives as a celebrity icon but back in 2016; nobody actually believed that Donald Trump could become the president of the United States and the leader of the free world. Now we can easily say that all those people who have underestimated Donald Trump were proven wrong. 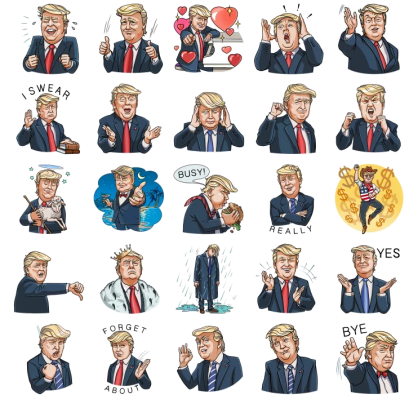 Stickers are an excellent way to express your emotions. You can send them as a reaction to your friends or in a group to emphasize how you feel regarding a specific topic. This pack is a treat; you’ll be able to use Donald Trump’s colorful character to react to various chats on Telegram. Stop sending boring emojis and start replying with these cool Donald Trump stickers

There are so many great stickers on this pack, such as President Donald J Trump’s sad face or happy face and much more.

How to add the Donald Trump stickers to my Telegram?

All you need to do is to press the link found on this page. The link will redirect you to the Telegram app on your phone, and you’ll be able to add the sticker pack for free.