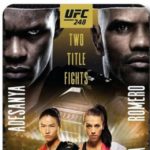 Watch UFC 249 full fights with Download has Less then 100 members, it's main lanaguage is English (US).

Watch Full UFC fights directly on Telegram or download them for free, all full fights from UFC 249, 248

This UFC channel is dedicated only to upload media for full fights from UFC 249 that took place at May 9th 2020 including fights:

This UFC event is extra special due to the current health restrictions in the US, there is no audience in the arena and all the staff members are wearing face masks, the fighters and their team were all tested before to check they are negative to any virus.