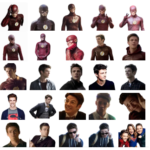 The Flash has members, it's main lanaguage is English (US).

Telegram chat stickers based on one of the most talked about superhero The Flash.

The Flash is an American drama series featuring DC Comics character wearing red suit running amazingly fast. Flash TV series was on aired in 2014. An agile and lightning fast DC Comics having ability to run superfast. Flash is a crime fighter, he fights for busting the criminals and sabotage their bad deeds.  So the real story begins when CSI investigator receives electrical shock that took him into comma for a period of time and when he recovers he has super hero power. Thanks to that lightening jolt that has changed his life and gifted him a super hero power that now he can use for better purposes. In this way Flash dedicated his life to serve the mankind by using his power.